The Government has unveiled new proposals to ban ‘antisocial’ pavement parking, a move it says will improve safety for families and people with disabilities. Measures include improving the traffic regulation order process to make it easier for councils to prohibit pavement parking, giving councils powers to fine drivers who park on paths, and a London-style nationwide ban on pavement parking.

All three options have been put out for consultation, with views being sought until 22 November. The Government has acknowledged there is still a major role for cars and other private vehicles, and says any future plans will need to take this into consideration.

However, it stresses pavement parking presents a clear safety risk when parked cars occupy the pavement and force vulnerable pedestrians to move into the road. 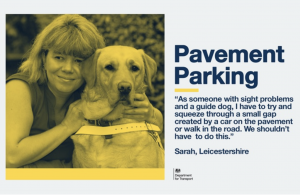